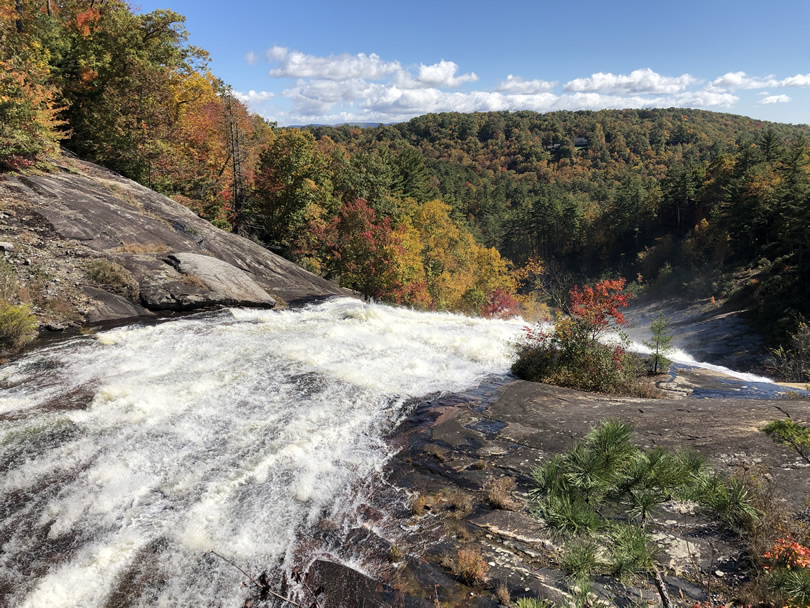 It is a beautiful view as the Toxaway River pours over the granite and disappears into the forest around Sapphire (where I lived when I was little).

If you drive west on 64 past Brevard, you will pass over Toxaway Falls.

There is now a place to park and you can now safely walk near the road.

On one side of the road is the dam that creates Lake Toxaway. Lake Toxaway is the biggest lake around here. It covers 640 acres.

On the other side is Toxaway Falls.

Toxaway was a tourist area in the early 1900s.

Developers built a stone and clay dam that was considered an engineering masterpiece. It created a huge, beautiful lake.

Wikipedia says Henry Ford, Harvey Firestone, the Vanderbilt family, John D. Rockefeller, James Buchanan Duke, R. J. Reynolds and Thomas Edison all visited the Toxaway Inn, built in 1903. It was five stories tall and had rooms for 500 guests at a time. And there were at least 6 other big hotels in the area.

Western North Carolina (and a lot of other places) had a huge flood here in July 1916. Actually, that year it was one flood after another.  The first Gulf Coast Storm* hit on July 8–10. Things washed out, but it wasn’t a disaster.

Then the second storm hit on July 15–16. Things were already soaked.  The French Broad River had hardly gone down from 4.8 feet when the rain began. It was so heavy, Brevard got 14.7 inches  in just one afternoon. The rivers began to rise. The rain gauges washed away, along with the bridges they were on. The French Broad crested at 23.1 feet. The little Swannanoa River crested at 20.7 feet.  It’s never been that high since. By the time the third storm hit, there was very little damage left for it to do.

Nearly anything that you read about in the history of the area that you can’t find anymore was wiped out in the Great Flood of 1916. Every dam that supplied hydropower was washed away.

But the Toxaway Dam held.

Then, there was even more rain. The lake was full and the water had to go somewhere. On August 13, 1916, Toxaway Dam collapsed. You can see how much higher the water is behind the dam than the land on the other side of the road. The original dam looked nearly the same.

Can you imagine what it must have been like?

When I was in high school we had a local history project to interview someone. I interviewed Oscar “Doc” Whitmire. He was the first person to tell me about the Great Flood. He was born July 7, 1898. (I Googled him just now.) So that would have made him 18 years old.

His family lived not far from the dam and always worried about it. There had been earlier dams in the same area that failed. He told me this dam was made by the same people. He said maybe they learned something. Maybe they didn’t.

He was probably talking about the dam on Lake Sapphire that failed. The Sapphire dam was rebuilt around the same time as the dam to create Lake Toxaway.

When they heard rumbling, they knew what it was. He said the ground shook and I can believe it. The water was so strong it rolled huge boulders along. It scraped off all the soil and trees and scoured the land down to the rocks.

You can see what geologists call “scour lines” in the rocks around Toxaway Falls. That is where huge stones were pushed by the force of the water, grinding lines in the granite that is left. About a half mile further down Toxaway River there is a 60-foot long boulder weighing nearly 900 tons that was moved there by the flood. All along the river there are “boulder flood deposits overlying pre-existing flood plain”**, boulders that were dug up and moved there by the flood.

If you go to Gorges State Park, you can see that some of the trees are kinda C shaped. The flood removed the soil and trees below them leaving the land much steeper. There has been a slow-motion landslide ever since.

All of the water in Lake Toxaway rushed through what is now Gorges State Park and into South Carolina. Crops were washed away and land was covered with flood debris for miles.

Nobody died in the flood, but farms were ruined. The top soil was washed away and land was covered with flood debris.

Lake Toxaway was drained of its water. Doc told me that the bottom of the lake was thick muck. People were walking out and picking up huge fish. Doc said they had stocked the lake with salmon. I looked it up. That’s true. They also stocked it with trout and bass. All these fish were together in the small pools that were left. He told me that the mud was so thick that people were making plank roads out to the small pools.

Western North Carolina continued to be a popular destination, but it was fifty years before the lake was back.

A law suit investigated contributing causes for  the dam break.

Two counties of South Carolina sued E. H. Jennings, a stockholder, director, and at one time vice president of the Toxaway Company for damages alleged to have resulted from the breaking of the dam at Lake Toxaway, in Transylvania County, on 13 August, 1916.

In 1902-1903 the Toxaway Company, a corporation, in which corporation the defendant was a stockholder, a director and vice president, built a dam 500 feet in length, approximately 60 feet in height, 260 feet at the base, with a crown of 26 feet, across the Toxaway River, which flows into Keowee River in South Carolina. This dam confined a body of water covering more than 640 acres, and varied in depth from 10 to 50 feet, and was more than 3,000 feet above sea level. The dam was built near the top of a rapidly declining shoal, and on a rock foundation. It was what is known as an earthen dam; it had no rock or cement core, and only had a small stone wall about 3 feet in width and 3 feet high, extending along a part of the foundation from about 75 feet on west side of stream to about same distance on east side of stream.

The report says that while the lake was still filling, “a spring of water appeared near the center of the dam and on the east side of the river. No investigation was made as to its source, but same was incased in rock and cement and piped out at the lower edge of the dam, and this flowed continuously as long as the dam was there.”

Other “mineral springs” appeared near the bottom of the dam that caused “land slides” in the dam that were, “30 feet in length, 8 to 10 feet in depth, cutting away a part of the crown or crest of the dam.” They would just fill them back in with more dirt.

At that time the road ran over the top of the dam, not on a bridge like it does now. The whole area was “forested,” with trees to stabilize the dam and the road.

Around July, 1911 there was a 4′ x 6′ “drop in”, that was 6′ to 8′ deep where the first “mineral spring” had formed in the dam. It was investigated and on the inside of the dam “15 or 20 feet in depth, was in a mushy or soggy condition.” Jennings son blasted rock a few feet from the east end of the dam to fall into the lake. (This would be near where you park now.) The idea was to “prevent wave-action from cutting away the crest of the dam during high winds.”

Jennings son also had cinders dumped into the lake from the top of the dam. This was supposed to fill in the holes, kinda like the stuff you put into your radiator to fix a leak. According to the law suit, it worked for a while.

But when the dam burst, that’s where it burst.

So, what is the law?

If there is negligence, the defendant is liable for damages, even if without the ‘act of God’ there would have been no damage.

If you find from the evidence that there was at the dam, and in its vicinity, for a period prior to the break, an excessive, extraordinary rainfall, a rainfall which an ordinary prudent man, under the same circumstances and conditions, and in the same relation to the dam, would not have expected, and further find that had it not been for such rainfall the negligence of the defendant would have produced no damage to the plaintiffs, then the defendant would not be liable.

Huh? That sounds like it contradicts the previous paragraph.

‘The defendant would not be liable if the jury finds that were it not for excessive, extraordinary rainfall the dam would not have failed.

Counsel discussed before us at some length the difference between ordinary care, the highest degree of care and gross negligence, but we deem it unnecessary to draw any distinction between them. It is all but ordinary care, which means that degree of care which a man of ordinary prudence would use in the same or similar circumstances. It must be that more care is required as the danger increases, and the degree of care in the particular case must be proportioned to the danger.

Who won? It looks like it was a mistrial. A new trial was ordered, but I couldn’t find it.

What Happened to the Flooded Land?

The flood destroyed the communities along the Toxaway River. The water completely changed the land. It scoured out gorges and left piles of debris up to 20 feet high. The land owners finally sold out to the Singer Sewing Machine Company to be logged.

The land was clear cut. Even the snags left by the flood were lumbered.

Then Singer sold the land to Duke Energy. They planned to build a hydroelectric plant, maybe two.

Duke Energy hung onto the land until the ’90s, but did not need it to expand hydro-power for the region. They offered the land to the states, North and South Carolina.

NC Division of Parks and Recreation created Gorges State Park in 1999. The park is 7,500 acres.

You could never believe what the land used to look like.  Destroyed by flood, then clear cut and now it is a beautiful wilderness that looks like it has never been touched.

You can see remains of the debris left by the flood if you look.

(When I first heard people talking about it, I thought they were saying Gorgeous State Park.)

R.D. Heinitsh, Sr. and a group of investors bought the land around where the lake had been in 1960. They cleared the trees and bushes that had grown up in the old lake bed. Then they built a dam that is engineered with a water level control to manage the water flow.

The new dam has 48-inch culverts at the base of the lake and a 130-foot spillway to control the release of water.

*These are the same 1916 Gulf Coast Hurricanes that wiped out Hilton Head Island.  They created storm surge of up to 11.6 feet all over the southern United States. They caused destruction from Florida, Louisiana, Mississippi, and Alabama all the way to Georgia, South Carolina, and Tennessee.

At least 80 people died in Asheville and that city alone estimated damage of at least $21 million. It brought a depression to Western North Carolina even before the Great Depression.