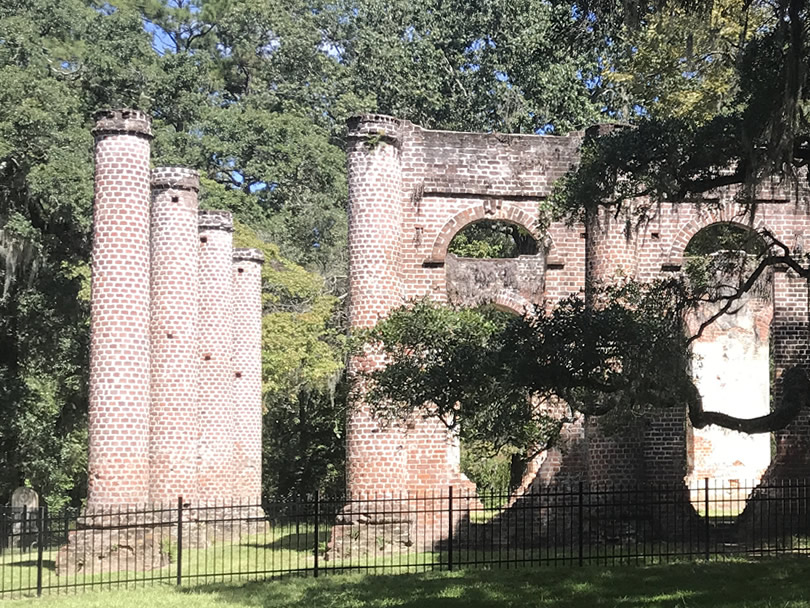 I found a photo of Old Sheldon Church Ruins on Pinterest. I looked it up and it wasn’t really that far from our route home from Hilton Head Island.  We just got off I-95 at State Rd S-7-48 and made a left on Old Sheldon Church Rd. It was maybe 10 or 15 minutes off the interstate.  We planned on getting lunch around the same time, but we couldn’t find any place to eat.

You enter through this gate.

The gate and historic marker are easy to see from the road.

Old Sheldon Church Ruins is about 17 miles north of Beaufort. I put the location into the GPS and had no trouble finding it.

These ruins are of Prince William’s Parish Church, built ca. 1751-57 and partially burned during the American Revolution, with its interior and roof rebuilt 1825-26. This Anglican church was primarily paid for by Lt. Gov. William Bull I (1683-1755), who is buried here. It is often called Sheldon after Bull’s plantation.

There is a historical marker sign. It says continued on other side, but it looks like I didn’t get a photo of the other side. Sorry.

This plaque is on the gate.

Here is the first view of the church ruins.

Old Sheldon Church, also called Prince William’s Parish Church was built sometime between 1745 and 1753 as a chapel of ease. A chapel of ease is a church building that is not the main church that is closer and easier for the congregation to get to.

The ruins are beautiful, an unusual brick version of Roman columns. Wikipedia says it is “English Georgian style, using the Roman Tuscan or Doric order.”

It is overshadowed by huge Live Oak trees and Spanish moss.

The church is now surrounded by a fence. It was put in this June. Idiots have spray-painted graffiti, broken headstones and carved their names  and even stolen bricks.

This is the back and the side that is furthest from the road.

Why is the church in ruins?

There seems to be no doubt that it was burned during the Revolutionary War, “in 1779, when General Prevost, marching from Savannah into South Carolina burned the Church”* then rebuilt in 1826.

There are some old tomb stones around the ruins.

They are very old.

I have seen wedding photos around the ruins. Members of the Parish Church of St. Helena in the city of Beaufort can marry at Old Sheldon Church.

There is a large parking lot across the road.

* Destruction of Churches and Church Property by Bishop Thomas,  as quoted in The Picturesque Ruins of Old Sheldon Church by Charles E. Thomas in a 1969 issue of Sandlapper: the Magazine of South Carolina

There are three old photos of the church ruins in the Historic American Buildings Survey (HABS) No. SC-137 in the Library of Congress. They are titled  Prince William’s Parish Church (Ruins), Sheldon, Beaufort County, S.