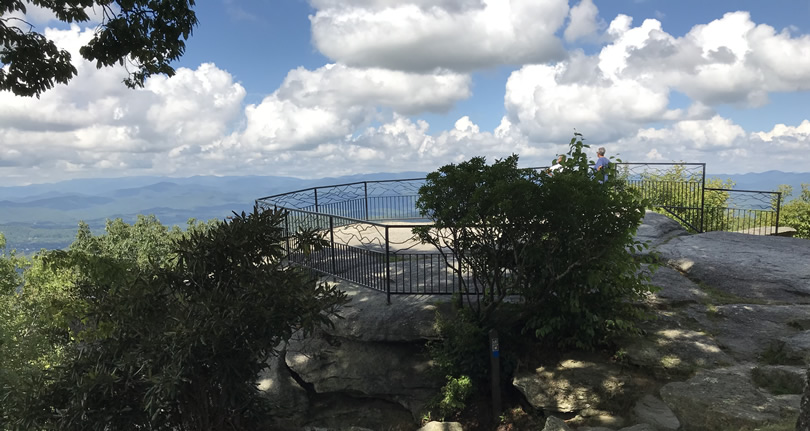 This drive to Jump Off Rock starts at the corner of Main Street and 5th Avenue in Hendersonville. That is the corner right after Mast General Store and Team ECCO Aquarium.

This is what Main Street used to look like.

This train used to run from downtown Hendersonville, Main Street to Laurel Park. You could get on the train at the corner Main Street, in front of what was then Hunter’s Pharmacy, then ride up the north side of 5th Avenue at speeds up to 25 miles per hour.

The “dummy” used to do a tremendous business. As many as 200 fares were collected on one trip. When business was rushing, an open-air trailer was added behind the passenger coach. The train makes hourly trips to the park, except when business was booming. Then trips were made as fast as the car could be loaded.

A dummy engine was a steam engine enclosed in a wooden box so that it would look vaguely like a coach. This was common then, when a train operated on city streets. They thought this would be less likely to frighten horses. In a lot of areas, trolleys were steam powered and the steam engine had to be disguised to be legal. (It was actually the racket that a steam train made that scared the animals.)

You are driving (or walking) in the West Side Historic District.
Nearly everything you drive by here is a contributing historic house.

Fifth Avenue was the main route going this direction before 64. There were a lot of Inns and Hotels. Elizabeth Leigh Inn, originally built in 1893, is at 908. Melange Bed & Breakfast, at 1230 5th Ave West, was built in 1919. Melange Bed & Breakfast is an Erle Stillwell house. He is a famous Hendersonville architect. I don’t think either Inn serve meals if you are not a guest. But, things change. They may.

The Oldest House in the West Side Historic District

At the corner where the First Congregational Church is, the train used to make a sharp right onto White Pine. If it was going too fast, it jumped the tracks. The passengers would get off, lift the wheels back onto the tracks and finish their trip.

You can make a left here and walk around Rhododendron Lake Nature Park. The parking area is just off White Pine on Primrose Lane. There is a sign. Rhododendron Lake was renamed Laurel Park Lake in the 20s. They’ve gone back to the old name.

Go straight. The road becomes Laurel Park Highway. You will see Canal Drive on your right.

There was a canal here that connected the two lakes, Laurel Park Lake and Rainbow Lake. Gondolas went back and forth on this man-made canal.

Follow Canal Drive to the small lake at the end. Then drive right, over the dam and make a left onto Crystal Spring Drive. There is soon an intersection. Crystal Spring Drive is the left turn. (There are signs, but it is confusing.) This is a really beautiful little stretch, especially when the Laurel is blooming.

The road soon widens a little and there is room to park.

There is a marker on the other side.

This is Crystal Spring. If you walk either way, you will get to the old steps and path to the spring. This is a great place for photos.

Continue on Crystal Spring Drive and it brings you back out to Laurel Park Highway. You are going to turn right, but if you look to your left, you can see one of the old hotels that catered to tourists visiting the Crystal Spring. You will pass it again on the way back.

Nearly at the top, you see Fleetwood Plaza. It’s just condos now, but can you believe there was once a huge 15-story hotel? Commodore J. Perry Stolz, the man who built the Fleetwood Hotel in Miami had a Fleetwood built almost the same at the top of this mountain. He commissioned Laurel Park Highway that you drove up. It was made of concrete and was the first highway in the United States to have electric lighting.

The Fleetwood Hotel was actually finished on the outside and got to the thirteenth floor on the inside.

Then the Great Miami hurricane hit. The wind, waves and storm surge undermined the huge multi-story casinos on Miami Beach and washed out the A1A and the bridges. The Commodore was wiped out. The Great Depression followed and the hotel remained, nearly finished, until it was sold for salvage in 1939.

Ahead of you is Jump Off Rock.