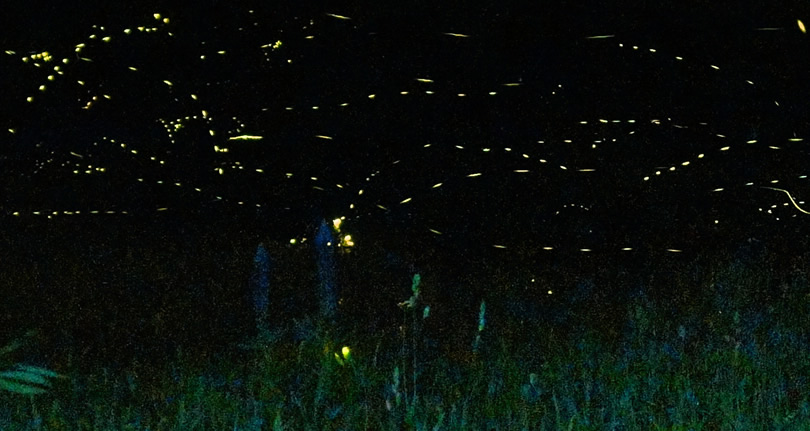 You will start to see fireflies around Hendersonville in late May to early June. They will be around for a month or so. Look for them in the early evening, just as the sun is starting to go down. They come out around 6 or 7 at night and you will be able to really see them as it gets darker. You can also see them in the morning just as the sun is coming up.

I was looking out the window of our new house and I saw fireflies flashing way up in the trees. I’ve always seen them lower, only a foot or so off the grass. These are not the same kind of fireflies.

We live in an area where there are a lot of different kinds of fireflies or lightning bugs. Our climate is just perfect for them. Nearby you can even see Blue Ghost fireflies and Synchronous Fireflies.

Did you know that lightning bugs aren’t bugs (insects) and fireflies aren’t flies? They are beetles.

This is the kind I am seeing right now flashing in the tops of the trees. They are in the stand of hemlocks in front of the cabin and there are some in the weeping willows and maple trees near the front porch.

Before I could look it up, Nature News told me about them. I learned that they are one of the earlier kinds of Lighning Bugs in this area.

Soon we will have a lot of these flying over the grass in front of the log cabin. They are the most common lightning bugs around here that you see flying over grassy meadows and pastures.

They make a letter J with their lights. They turn on their lights, dip down then fly straight up so that it looks like they are writing “J” over and over again.

Only the male makes a swoop when he lights up. The female just makes a little flash in response.

Call Down a Firefly

Did you know you can get a firefly to come to you? Use a very small flashlight. Make a flash about the same as the shortest flashes you are seeing. Wait a little before flashes. Soon male fireflies will come to see if your flashlight is a female. If you see the “J” swoop, that is a male. You can aim the flashlight at him and blink to call him over. Females are close to the ground, so it works better if you hold the flashlight very low.

We have Blue Ghost Fireflies around here. People even see them in their yards if they live in the right places.

Synchronous Fireflies turn their lights on and off at the same time. They are found in old growth hardwood forests where it is damp enough for them, near creeks or rivers. They start lighting up in late May and the show is over by the end of June. You can see Synchronous Fireflies from the Blue Ridge Parkway, about 40 minutes away from the cabin on the other side of Asheville. (More about them below.)

Asian fireflies are all synchronized. They would be more surprised by our regular fireflies.

Where do Lightning Bugs go in the winter?

They don’t migrate. And in our area it doesn’t get cold enough for them to actually hibernate. So the answer is, they don’t really go anywhere.

Lightning Bugs are beetles. Beetles have a life cycle of egg, larva, pupa and winged adult. Most of their lives they are larvae or pupae.

The light show they are putting on for us right now is so the males and females can meet. Then they lay eggs just below the surface of the ground somewhere damp, usually under leaves. The eggs hatch in a few weeks into larvae.

Lightning bug larvae spend all their time eating other insects, snails, and worms. If it gets too cold, they burrow into the ground, into bark or into deep leaf litter until it is warm enough for them again. Our winters are not cold enough for them to have to hibernate.

Then they pupate. They get a shell, like the chrysalis for a butterfly. They can’t move, so they hide really well before they turn into a pupa. They don’t eat anything at all. The pupa stays dormant until firefly season. Then they break out of the shell and they are fireflies!

The entire life cycle takes different lengths of time for different fireflies. The ones you see at the log cabin have a life cycle of two years, most of it as a larva.

Not usually. They don’t taste good.

Nature News is a local radio program about what is going on in Nature, especially in our area. Yesterday’s Nature News, June 1, covered Fireflies. That’s where I learned that the ones I am seeing in the trees are commonly called Christmas Tree Lightning Bugs.

They talked about the Synchronous Fireflies. They said that it may be that, as soon as a couple of the bugs flash, the rest flash, too. Nobody wants to miss out. So that it looks like the whole forest is flashing on and off in sequence.

They talked about the Smokies Synchronous Firefly lottery. You have to apply way ahead of time if you want to get into one of the campgrounds around Gatlinburg to see this phenomenon. If you try, you have a one in five chance of getting a ticket. Then you meet at the park headquarters and ride in on a shuttle bus to see them.

See Synchronous Fireflies Near Us

We also have Synchronous Firefly populations scattered around North Carolina.

“You can see them in a relatively somewhat older growth of forest, a forest that is usually more than 50 or 60 years old, along the edges of the forest, a little ways into the forest. This happens right after sundown… between 9:00 and 10:30 at night.”

Nature News told us where we can look for them. They are in a couple of areas along the Blue Ridge Parkway north of Asheville on both sides of Craven Gap and above Bull Gap and above Bull Gap along the Parkway. If there’s a safe wide area to pull off, turn your lights off and let your eyes get used to the dark. Then you will see the synchronous fireflies. They are only visible for about two weeks every year, some time between the third week of May to the third week in June. Scientists think it has something to do with the temperature and moisture in the soil.

If it is too wet or too cool, you won’t see them.

None of these are my photos. I have not been able to get my iPhone to take photos of lightning bugs.

The featured image is by Mike Lewinski.
The fireflies in the tree are by Sushantk2212. The ones in the grass is a Public Domain photo from Wikimedia Commons by an unknown photographer. The photo of a larva is by Tai Po Kau. The fireflies at the edge of the forest is a photo by Kay Röllig.