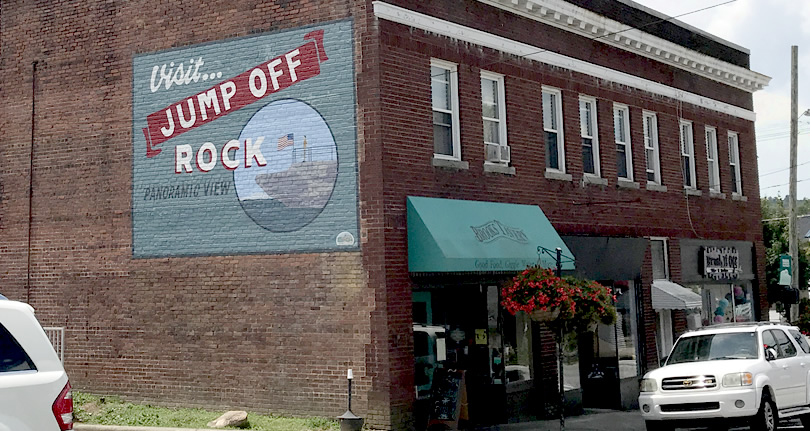 If you are on Main Street and look west at the corner of 3rd Ave W, by the Apothecary sign at Mikes on Main, you will see the Coca Cola mural on the corner and the Jump Off Rock mural before the next corner.

You would think this would be the road for Jump Off Rock, but it isn’t. Fifth Avenue takes you out to Jump Off Rock.

The mural is on the side of the Brooks Building.

The storefront on the left, 142 Third Avenue West, is now the Brooks Tavern. We went there for lunch yesterday.

The Brooks Tavern has a great sandwich menu. Everything we had was delicious. I had fish and chips. Personally, I thought it was better than the fish and chips I had at our local Irish pub. The fries were very skinny, but were not over-cooked. My husband had a burger, which was better than my fish. Our daughter had a mimosa and a beautiful salad. I don’t remember what else everybody had, we were busy talking and I was paying more attention to my own food. Beau, our son-in-law, shared some of his chicken fingers dipped in honey mustard. That was really delicious, too. Oh, and the coffee was good. That matters.

Brooks Tavern has 10 beers on tap, 40 more in bottles and cans and a full wine and liquor bar. A newspaper on the wall says that the owners are Mark and Cindy Johnson Lowe and that with every regular-priced draft beer purchased, Brooks Tavern will donate 25 cents to charity.

The mural on the side of the building hasn’t always been there, but it’s been there a really long time. I tried to look up when it was painted, but couldn’t find anything and couldn’t find any historic photos that show that side of the building. Which means it’s likely it wasn’t there, or they would probably not have taken the picture from the other side. Just my guess. I don’t remember it from when I was a kid.

I did find an article in the paper about when they re-painted the mural. I don’t know who originally painted it, but Knox Crowell refurbished the mural. The article says that the mural had been there at least 30 years.

“Bringing the iconic wall art back to its former glory has been a challenge. Crowell had to find acrylic paints that would match the mural’s hues and stand the test of time. He also had to fight the urge to modernize the art that some estimate was painted on the weathered bricks at least 30 years ago.”

Two-story, deep red striated brick Commercial Style building of square configuration. Modillions are visible beneath the metal cornice. The storefronts are minimally altered, with transoms covered. The central doorway to the upstairs appears original with multi-pane glass transom. The west elevation of the building has a double entry door which appears original. Pairs of one-over-one windows with rusticated stone sills remain. A band of vertical brick surrounds the building, dividing the first and second stories, and also appears above the tops of the windows at the second story.

The ceiling looks like it is the original decorative metal ceiling.

Known as the Brooks Building, it was purchased by S.E. Shipman in 1943. Built with five residential apartments upstairs, tenants of the three storefronts have been The Smoke Shop, American Drug, Clifton’s Restaurant, Custom TV and Radio Service, the Next to New Shop and Office Equipment Service Co.