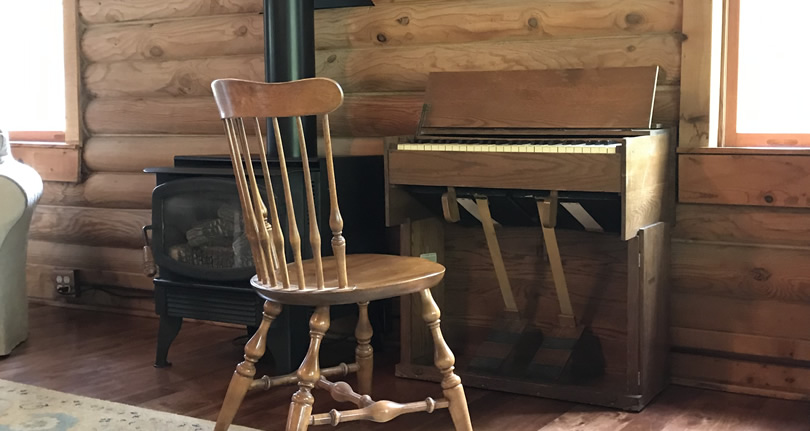 There is a little pump organ in the living room of the log cabin. It is an antique folding organ.

It folds down into a single case. “Portable, strong, durable, easily opened and closed. Easily transported and always adequate. A treasure for missionaries or traveling singers.”

It is made by the Estey Organ Company out of Brattleboro, Vermont. The company was founded in 1852 and at one time was the largest Organ manufacturer in the United States. Estey Organs were shipped all over, to Great Britain, Australia, New Zealand, even Africa, and all over the United States and Canada.

There is a very similar organ in the Anchorage Museum. It belonged to Hudson Stuck, the legendary explorer and mountain climber that co-led the first successful expedition to climb Mount McKinley (now Denali) in June 1913. Did you know he was a missionary? Each winter he traveled more than 1500–2000 miles by dogsled and later another 30,000 miles along rivers in a shallow-water boat preaching and ministering to remote people. He brought along his portable organ to accompany hymns.

Hudson Stuck also worked to expose how Native Alaskan people were being exploited.

Many of these durable little folding organs can still be found. They were made with waterproof glue, brass screws and coated wire to “avoid the disastrous effects of tropical climates on wood and metal alike.”

The organ is very easy to play, just pump the pedals to give it some air and play it like a piano.