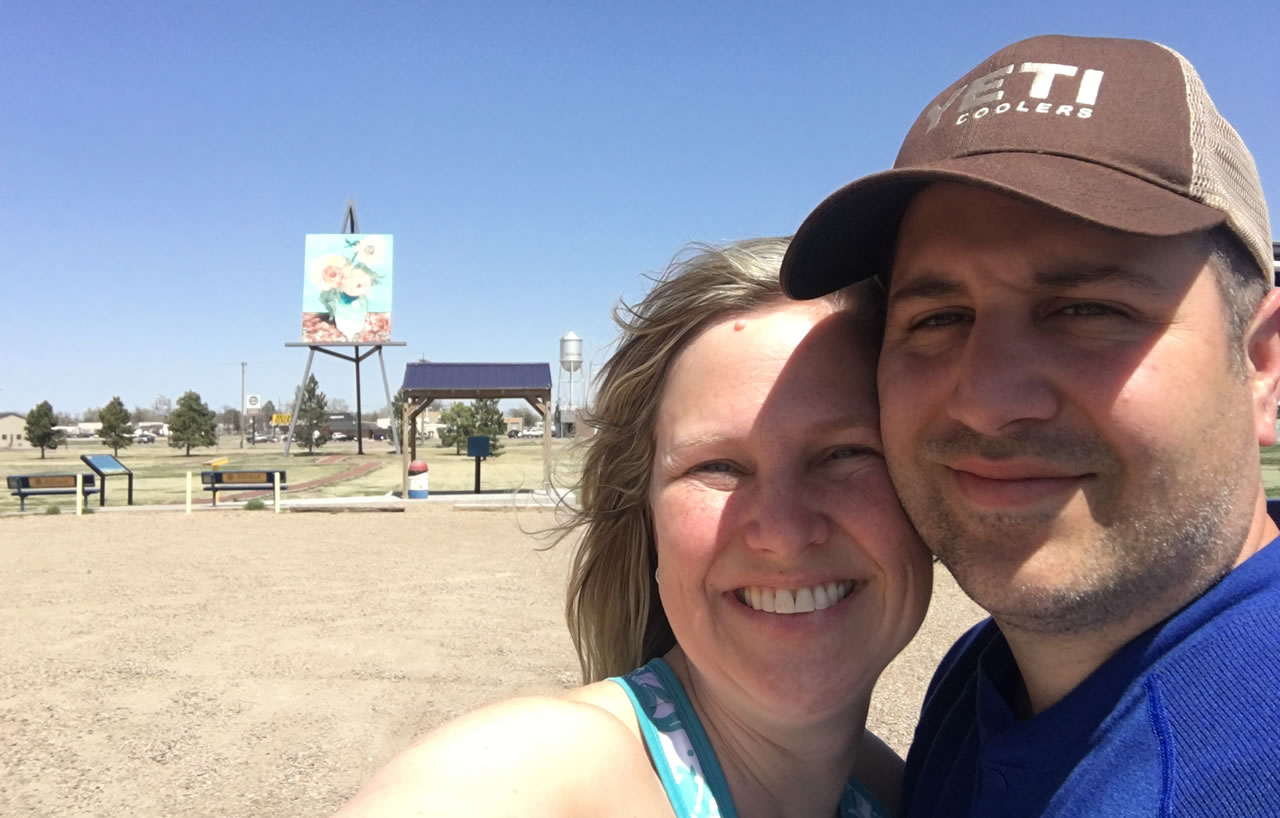 There is a series of paintings based on Vincent van Gogh’s seven sunflower paintings on giant easels. They were created by artist Cameron Cross.

Each easel is 80 feet tall and weighs some 45,000 pounds.
Each canvas was made by laminating together 24 sheets of 3/4″ plywood. They are 24 feet x 32 feet.
The wood was coated with layers of matte fiberglass, then automotive primer.
Each painting used 17 gallons of Acrylic Urethane Enamel industrial paint.
The easel’s supports were sunk some 35 feet into the ground, so they won’t blow over. Seven were planned, but as far as I can tell, only three were made.

“It is part of a series of giant reproductions of artist Vincent Van Gogh’s seven famous sunflower paintings. Cross’s other Van Gogh reproductions are on display in Canada, Australia, the Netherlands, Japan, South Africa, and Argentina.”
Kansas by Ruth Bjorklund, Trudi Strain

I think the book is wrong. I cannot find any evidence that any others were ever made.

The first Big Easel was created in the artist’s home town, Altona, Manitoba, Canada on October 17, 1998. It was named “the largest painting on an easel” by the Guinness Book of World Records. Altona, the Sunflower Capital of Canada, is a small, mostly Mennonite community with a population of around 4,000 between Winnipeg and Grand Forks, North Dakota. They grow a lot of sunflowers and have a Sunflower Festival.

The second giant van Gogh was erected on November 8, 1999 in Emerald, Queensland, Australia, Altona’s sister city. The Queen of the Altona Sunflower Festival wins a trip to the Emerald Sunflower Festival. Emerald is a larger town, with a population around 15,000.
(The Emerald painting looks rather like the one that Vincent dedicated to Amelia Pond.)
www.queensland.com/en-us/attraction/van-gogh-sunflower-painting

The one we saw was the third, in Goodland, Kansas, the Sunflower State. This Van Gogh Project Big Easel was dedicated August 2001, during Goodland’s Sunflower Festival. The painting is so huge, Cameron Cross painted it in sections as big as a local building would hold, then assembled and completed it on-site. In July 2012, the Goodland giant Van Gogh was taken down and touched up with brighter colors then welded back in place. Local Goodland artists have painted smaller Van Goghs on easels in city parks.