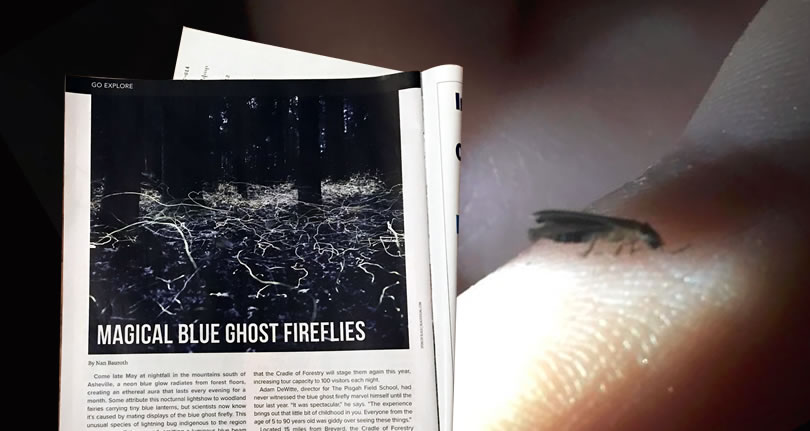 Blue Ghost Fireflies are very rare, but they can be found even in people’s back yards in some areas around here.

We went looking for Blue Ghost Fireflies in two places they are supposed to be found.

The first night it drizzled. We’ve been told that they don’t like the rain, so maybe that’s why we never found anything as we crashed around in the dark getting wet.

The next weekend we went somewhere else. And there they were! Lots of them.

To see them your eyes have to adjust to the dark. Use a flashlight pointing down so you don’t trip on the trail, find a likely spot, turn off the light and when your eyes adjust, you may see them.

They were everywhere. On one side of the path it looked like a little fairy village. These were females. Close up they looked like glowing short worms lying on the ground. Nearby, just below the level of the leaves, the tiny little beetles were hovering and gliding around, just below the leaves on low plants. Just like in this video. These were the males. They look like the fireflies you’ve seen, but smaller. They glow blue.

This is how my photos turned out.

One landed on a little boy with us. So, I got one photo. He is not glowing, though.

The May/June issue of GO Magazine from AAA has an article on Blue Ghost Fireflies by Nan Bauroth.

Come late May at nightfall in the mountains south of Asheville, a neon blue glow radiates from forest floors, creating an ethereal aura that lasts every evening for a month… Scientists now know it’s caused by mating displays of the blue ghost firefly. This unusual species of lightning bug indigenous to the region hovers just off the ground, emitting a luminous blue beam instead of flashing yellow.

… the Cradle of Forestry is the birthplace of science-based forestry management, a legacy of George and Edith Vanderbilt. The site offers exhibits, activities and a gift shop, as well as a “Waterfalls n’ Wine” tour, and new for this summer, “The Blue Ridge at Sunset Tour” experience atop Black Balsam Knob.

Tours promise to fill up fast this year, so it’s advisable to reserve early. For more information or to make reservations, visit www.PisgahFieldSchool.org.