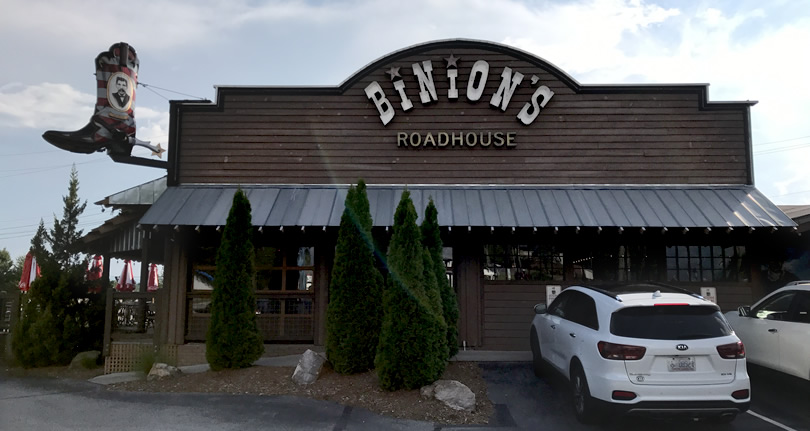 You can’t miss seeing Binion’s Roadhouse Restaurant. It looks like a whole old west town on the side of 64 as you are heading toward downtown from I-26. The address is 1565 4 Seasons Blvd, Hendersonville, NC.

It looks like separate little buildings, but it is all one restaurant.

The parking lot is usually packed, but they seat you fast.

There are peanuts on the table. Then they bring out little rolls with honey butter.

The menu is typical steakhouse at typical prices. Not expensive at all.

The restaurant is pretty dark inside. And there are Western style things everywhere you look.

There is a bar at one end and an outdoor eating area.

Just as you walk in the front door, there is a display about the Moonshiner Popcorn Sutton.

If you don’t already know, Popcorn Sutton was a moonshiner and bootlegger from Maggie Valley and over the state line in Cocke County, Tennessee. He was always a character. He wrote a how-to book for moonshiners, then made some videos. He finally got himself convicted for moonshining, but killed himself rather than go to jail.

They are running a video about the old moonshiner.

On the other side of the entry from Popcorn Sutton’s still is the huge slice of the Carl Sandburg Oak. The 85-foot white oak tree from the Sandburg property cut in 2006.

Carl Sandburg was a poet, and song collector who lived near here. He also wrote a biography of Abraham Lincoln.

The cross section slice is marked with events, inventions, wars and presidents from 1829 to 2006 that happened over the 177-year life of the oak.

You can click to open large enough to read.